Concarneau is the third biggest town in Finistère and fourth biggest fishing port in France..

The maritime citadel is in the heart of the city and is best discovered from the sea. The town was built around the walled city, originally a small island inhabited by fishermen, later fortified in the 15th and 16th centuries. Sébastien Le Prestre, Marquis of Vauban, finished the work in the 17th century.
Sardine fishing slowly transformed the city, with factories and canneries springing up everywhere in the commune. At the beginning of the 19th century about 300 sailing boats hunted down this precious silver fish. Sadly the fish grew rare and there was a famine. In 1905, the “fête des Filets bleus” (festival of the blue nets) was created to help families in need. Numerous artists took part. Today the “Filets bleus” festival is an institution. Each year, the tradition is perpetuated. In 2005, for the centenary, the festival lasted a whole week.  Each evening, famous musicians played in front of the walled city. A tradition was established in 1905, that each artist donated a piece of art, as a subscription to the “Filets bleu”, a tradition that still continues today.

The coat of arms of Concarneau – the three axes symbolise the defences of the walled city.

As early as the end of the 18th century, Concarneau the ideal resting and relaxation place for intellectuals. In 1847, Gustave Flaubert and Maxime Du Champs set off on a journey through Brittany and stayed a few days at the Hotel des Grands Voyageurs. Our hotel was built in 1787 and was popular with famous people, as it was state of the art, with running water. At that time, a big sign on the front of the hotel read “lodging on foot or by horse”. Cars and horses could access the hotel through the porch in the gable end. In 1870, George Pouchet , an assistant naturalist from the National History Museum, came to shelter in Concarneau. The letters he sent to his Parisian friends encouraged them to come and stay in Concarneau. From then on, numerous scientists came to stay in the town to search for the cause of the disappearance of sardines. Today, the “Marinariaum” is still a reference in the marine biology sphere.At the end of the 19th century, thanks to the scientists, who marvelled about Concarneau and its pleasant climate in all the Parisian salons, artists flocked to the city: Guillou, Maxime Maufra, Theophilus Deyrolle… Concarneau became the place to be and even attracted foreign visitors. A number of American painters came to stay. The countryside around the city also attracted people. The Russian princess Zénaïde Narychkine, “Countess of Chauveau” and also widow of Youssoupoff, bought the manor of Kériolet and transformed it into a castle, today called Château de Kériolet . This marks the beginning of tourism in Concarneau.

Today, Concarneau is the 4th biggest fishing port in France; not only due to the number of fishermen and boats, but also due to the volume and excellence of the catches. Concarneau is also reputed for its naval constructions. Numerous sailing boats, tuna vessels and a variety of other boats have been built in Concarneau. The sea is part of its tradition and heritage. Concarneau is happy to be named “the blue town”. 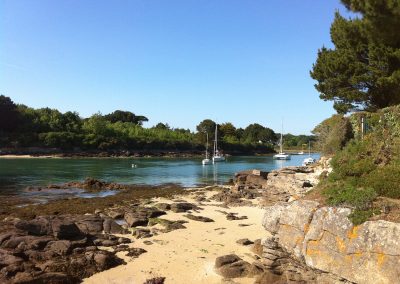 Concarneau will enchant you

City of art, history and water